I'm very late discovering this great collection of news stand posters from the Brighton Argus (last updated several years ago. It's clearly where life happens - makes you want to go and live there. Thanks to David Woodward for the link. 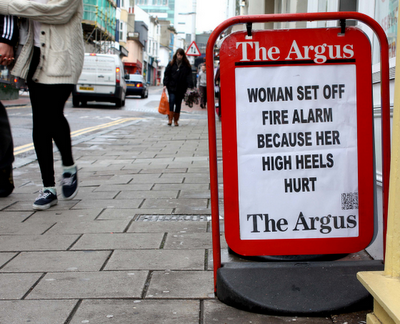 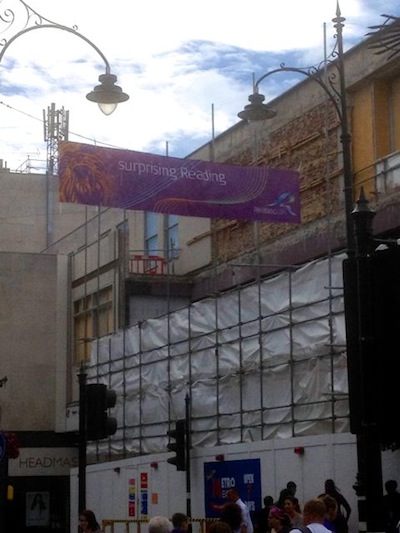 Historic Reading
Beautiful Reading
Reading, paradise by the Kennet and Avon Canal
Reading, the Athens of ...
I heart Reading.

I'd have liked to have been in that meeting.

Quite a few of us are still puzzled by that logo. Graffiti concept - great. Execution of the concept - not so great. I rather like the one the New York Times used for its Olympics coverage.

Is it the one that got away?


'...Visa went too far. Not only was it the only credit card accepted at venues, signs on every cash register read, “We are proud to accept only Visa,” a slogan of doublespeak so hideous its originator deserves a back of the hand from Don Draper.'

Two versions of the same message seen at Wisley Garden. 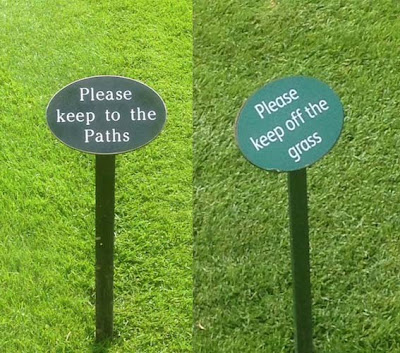 I'm trying to decide if they mean the same thing. Obviously they do, in that the outcome is the same (if we ignore the option of walking on the flower beds). There is also a strong hint in the positioning of the Path version – it's on the grass. 'Oi! Not 'ere. Can't you see the path?'

But 'Keep off the grass' comes with baggage: bossy park keepers, school rules (at my school, the teachers and prefects could walk on the grass).

'Keep to the paths' mostly works, except that some of the paths are grass... which would stop robots in their tracks if they've also seen the 'keep off the grass' version.

I like the way Paths is capitalised, by the way - a multi-faith notice.

Guerilla signs on the underground

Thanks to Gill Ereaut for pointing me to this. There's loads more on The Poke. I'll now be paying more attention to notices on tube trains.