Extreme simplification: strip out everything they're going to forget

When I hung around in the world of branding, we used to talk a lot about essences - the main idea about a product or company. We sometimes used an exercise in workshops to tease out the essence of an idea - we asked people to sum up a concept or brand in less than ten words.

We'd start with some generic ones to get the conversation flowing:
Starbucks: OK coffee, comfy chairs
The Atkins Diet: Eat lots of meat, get thin
Credit card interest: Pay it all now, or pay more later
The off-side rule: don't hang around near the goal

Then we'd throw in some of their products to see if they could do the same thing.
BlackBerry
Pay as you talk price plans

This is a form of extreme simplification. I was reminded of it on a visit to Kew Gardens today. Kalani Seymour, who is Interpretation Manager (it means she helps visitors to interpret what they see), is setting an MA project, and showed us around her enviable workplace.

On Kew's treetop walkway, Kalani has written and commissioned design for a series of ultra-short explanations of how trees work.  The way she put it was 'you strip out everything they're going to forget'.

Here's one of them. A kind of scientific haiku, I reckon. 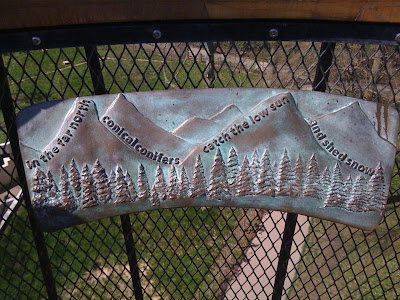