Last Friday I was at the excellent Design of Understanding conference at St Brides. David McCandless gave a very good presentation of the thinking and process behind his Information is Beautiful website and book.

A common technique used by David McC, and the various newspapers represented at the conference, is to vary the sizes of circles used to represent different quantities. At one point Mark Barratt asked the question on a lot of people's minds: hasn't it been established that circles are a pretty unreliable way to compare quantities? I'm not sure it would be fair to say he was brushed aside - perhaps the background to his question wasn't really understood.

Doubts about circles go all the way back to Willard Brinton's 1916 book Graphic methods for presenting facts. Perhaps further. 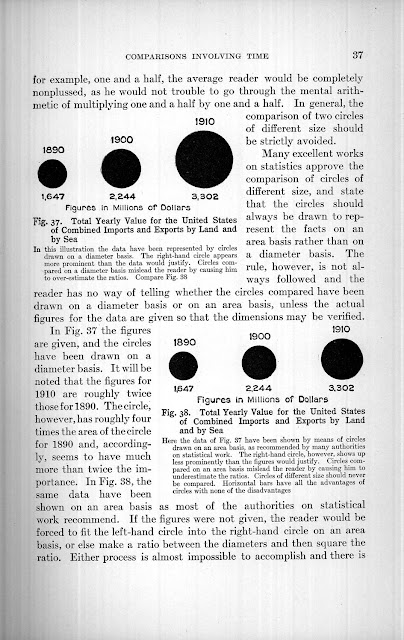 Brinton's explanation shows, first, the well-known difference between using diameter and area - diameter hugely exaggerates differences. However, he goes further and condemns even circles that compare areas, pointing out that they have the opposite effect - we tend to underestimate the area of the larger circle. His conclusion: 'Horizontal bars have all the advantages of circles with none of the disadvantages'.

In his 1956 PhD thesis, James Flannery proposed a correction formula, so that the perception of the difference would be correct, even if the actual area of the circles is not. Several other people researched the same issue and came up with similar findings to Flannery's (apparent value = actual value * 0.86).

Unfortunately for seekers after simple solutions, Hans-Joachim Meihofer then showed that individuals varied too much in their judgements for Flannery's formula to be reliable. However, he demonstrated that the whole problem could be solved by using stepped sizes of circle and providing a scale.

The story is well told in Michael Macdonald-Ross's 1977 review 'How numbers are shown'.

Unfortunately it is not quite as simple as that - Patricia Gilmartin went on to demonstrate how important context is when viewing circles of different sizes (demonstrated through the well-known Ebbinghaus illusion). The centre circles are the same size. Oh dear. 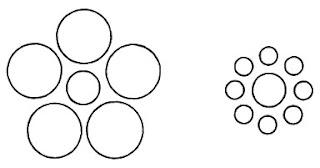 My personal view is quite relaxed - I see circles on maps as simply relative and I don't expect to derive actual data from them. I am happy to see them as approximate (tiny vs medium vs huge). However, I have great respect for those who see statistics as sacred, and yearn for integrity in presentation...  which brings us to Michael Blastland's excellent presentation at Design of Understanding. He rendered this whole discussion somewhat irrelevant by questioning the reliability of so much of the data used for apparently simple charts in newspapers. And he reminded us that statistics is as much about probability and uncertainty as about facts - a view enshrined in the title of Howard Wainer's latest book on quantitative graphics: Picturing the uncertain world.

Michael's Go Figure articles on the BBC website should be required reading for information designers.