Yesterday's papers carried a story about giant new container ships which have been ordered. Obviously an opportunity for a useful graphic. Well, a graphic, anyway, in the case of The Times. 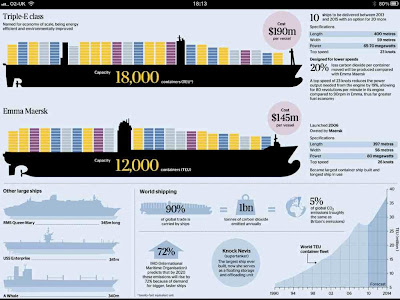 A few questions: What's the colour coded cargo represent? Can these two larger ships really be more than twice the length of the other big ships shown in grey below? Is the 18,000 container ship really the same size as the 12,000 container ship (the figures supplied suggest they are almost exactly the same size, so how come the apparently smaller one appears to have as many containers on it)?

The Guardian made a better fist of it, although much less ambitious. 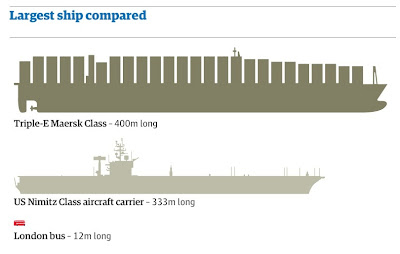 The only problem with this one is that the correct unit of account to impress about the size of ships is surely the football pitch (105m) not the London bus. It's got to be something that you think is very big, that the impressive object is much bigger than. Most ships are longer than a London bus.

The greater error, of course, would be to compare it with something much bigger - for example, this ship might be big, but it's nothing like the size of Wales (or Belgium, if you want to go metric). Odd thing is, I can't think of  a unit of measurement that comes between a football pitch and Wales. The Isle of Wight, possibly.